Greens MP for Newtown Jenny Leong arranged for the Minister for Heritage to attend a tour of Austalian Heritage Park (ATP) in January 2016, with a number of historians and community representatives. With the sale of ATP to Mirvac, the management of the wealth of cultural, innovation and transport heritage at Australian Technology Park and surrounds is more urgent than ever. 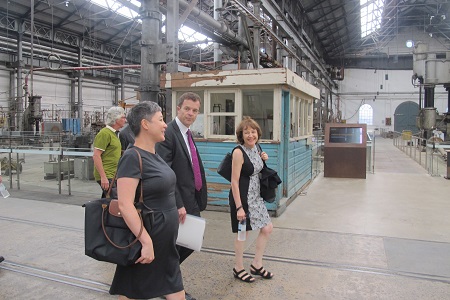 There is so much more to the heritage of the site than the buildings, physical artefacts and machinery. As numerous heritage studies and conservation management plans have shown the significance of the tangible heritage encompassed by the Eveleigh railway workshops precinct (including both the old and the new Locomotive Workshops buildings - now the ATP and the National Innovation Centre, the Large Erecting shop, the Works Managers’ building, the Carriage Workshops, Paint Shops and Stores buildings and the Chief Mechanical Engineers Office) is immense. However, the site’s heritage value extends beyond its buildings, their architectural and technological significance and the remaining machinery; to the site’s intangible cultural heritage, its history, which is of cultural, national and international significance.

As UNESCO’s World Heritage Convention formally recognised in 2002, industrial sites ‘are important milestones in the history of humanity’ because they ‘testify to the ordeals and exploits of those who worked in them’. Moreover, as The Convention for the Safeguarding of the Intangible Cultural Heritage adopted by the thirty-second session of the UNESCO General Conference in 2003 noted, intangible cultural heritage includes the practices, representations, expressions, and knowledge and skills, that communities, groups and, in some cases, individuals recognise as part of their cultural heritage. Sometimes called living cultural heritage, such intangible heritage is manifested in oral traditions, social practices and traditional craftsmanship.

Due to the imminent sale of ATP, UrbanGrowth’s work on Central to Eveleigh, and the resulting fragmentation of the site leading to a growing number of stakeholders it has become extremely important to ensure that there are heritage conservation and interpretation measures put in place as soon as possible to prevent irrevocable damage to the site’s tangible and intangible heritage.

Following the meeting, Jenny wrote to the Minister reqesting that he explore the following options:

There is a need to ensure that these options are consistent with existing contractual obligations with Mirvac, Government stakeholders, and existing agreements. It is also crucial that the Conservation Management Plan is adhered to.

One possibliity would be to include the former Eveleigh railyard precinct, its heritage oversight and a future Living Cultural Heritage Centre under the auspices of the Historic Houses Trust.  The Trust has taken an innovative and holistic approach to heritage conservation in other buildings they manage, such as the Hyde Park Barracks, the Susannah Place Museum, and other resources associated with Sydney Living Museums.  An initial Heritage Working Group could be established under its auspices.

Links to other Workers Walls as suggested by Prof Taksa for ATP: