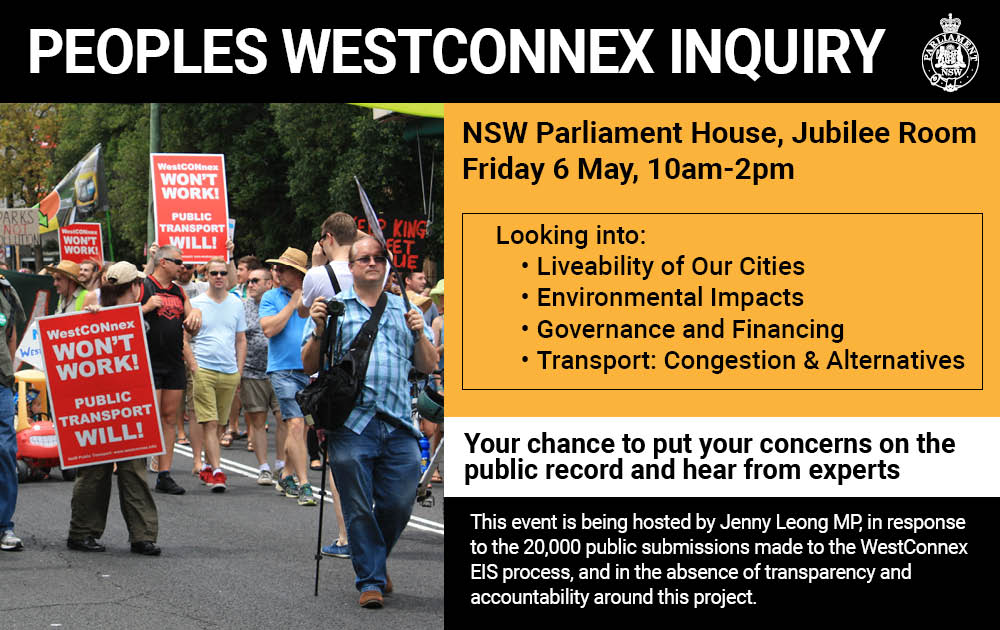 As the venue has reached capacity, registrations are now closed for the People’s Inquiry into WestConnex.

If you would like to go on a waiting list, in case spaces become available, please email us at newtown@parliament.nsw.gov.au

The proceedings will be recorded, transcribed and posted on our website following the event.

Although over 20,000 submissions were made by organisations, councils and members of the public in response to the Environmental Impact Statements released for Stages 1 and 2 of this $16.8 billion project, much of the detail and information contained in these submissions has never seen the light of day.

We are concerned that the NSW government is pressing ahead with this deeply flawed project, supported by federal funding, despite the serious concerns that have been raised and the mounting evidence that demonstrates its lack of credibility and the damage it will do to our communities. And so we’re inviting a range of people from different organisations to give short presentations on their areas of speciality in relation to the impact of this project however, most of the time in each session will be open to the public for comment and questions.

The proceedings will be recorded and transcribed and posted on our website.

We have supported community calls for independent inquiries at a state and federal level about this project and the lack of good governance and accountability surrounding it, but so far these calls have not been acted on.

That’s why we are now taking action into our own hands by hosting the WestConnex People’s Inquiry.

See the full schedule for the Peoples WestConnex Inquiry here.