In May 2019, Transport for NSW released a plan to finally add lifts to Redfern station. This came after years and years of lobbying and campaigning by local community and stakeholder groups like Lift Redfern and REDWatch.

After strong opposition to this original plan the government came up with 4 options for the accessibility upgrade and took submissions on these.

Information about the upgrade and the 4 plans offered by TfNSW can be found on this site - Redfern Station Upgrade - New Southern Concourse.

While the strengths and weaknesses of each of these plans varies, the community believed that they failed to sufficiently:

To represent these concerns a new community group, ReConnect Redfern, was formed by Residents of Little Eveligh St, The Watertower and REDWatch. In consultation with other relevant stake holders, including University of Sydney, Mirvac, City of Sydney councillors and Carriageworks this group came up with an alternative design option (Option 5) and presented it to TfNSW in August. You can see that presentation here. 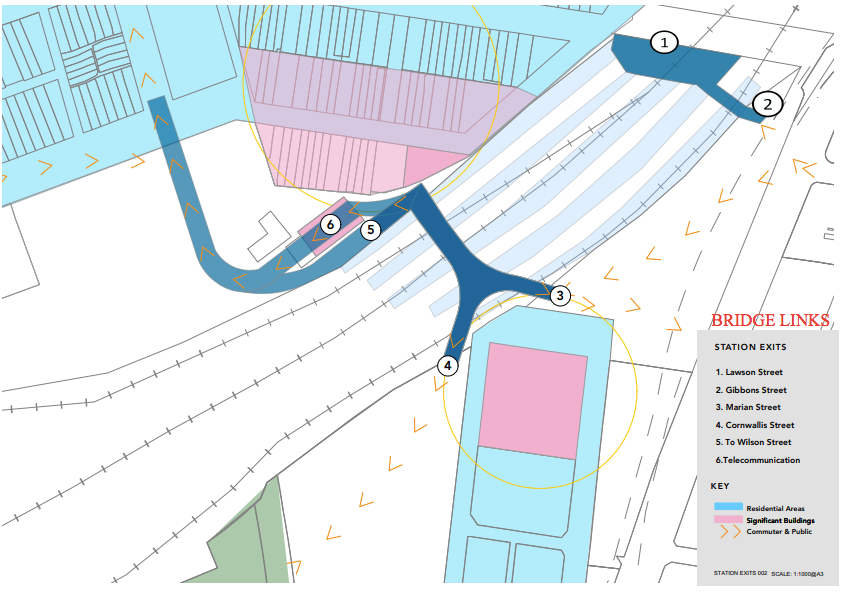 This plan combines elements of the TfNSW plans as well as satisfying the TfNSW requirement that only one bridge be built.

There are no excuses for this project to fall short of the community's expectations. One reason given to support the sale of the neighbouring ATP site was that the funds be used to upgrade Redfern station. The redevelopment of the site is underway and it will soon house an additional 10,000 Commonwealth Bank staff, adding pressure to the already busy station.

We have written to the Transport Minister in relation to this upgrade on two occasions. On 12th June 2019 we outlined residents' concerns regarding; The unsuitability of Marian and Little Eveleigh Streets as high traffic entrances, the absence of lifts for Platforms 11 and 12 and the inadequate width of the proposed bridge. On 26th September, 2019 we wrote again to the Minister outlining features of the community plan (Option 5) and asking that it be given due consideration by TfNSW. Our office also asked that Minister Constance meet with representative from the community groups to hear their concerns.

TfNSW released its preferred plan on November 4, 2019 which is basically the same plan as originally proposed with some additional street treatments on the small residential streets where the proposal will locate the entrances and exits to the new concourse. This plan can be seen here.

Reconnect Redfern and other local residents groups such as REDWatch have condemned this plan as not addressing the concerns of the community and residents and have called for Transport Minister, Andrew Constance to meet with them.