This morning we woke to news that the NSW Arts Minister Don Harwin appears to have been spending time at his holiday home in Pearl Beach while artists, musos and all those working in the creative industries have been trying to come to terms with the reality of losing all of their income, cancelling all of their plans and in many cases facing the grim reality that they can’t pay their rent. 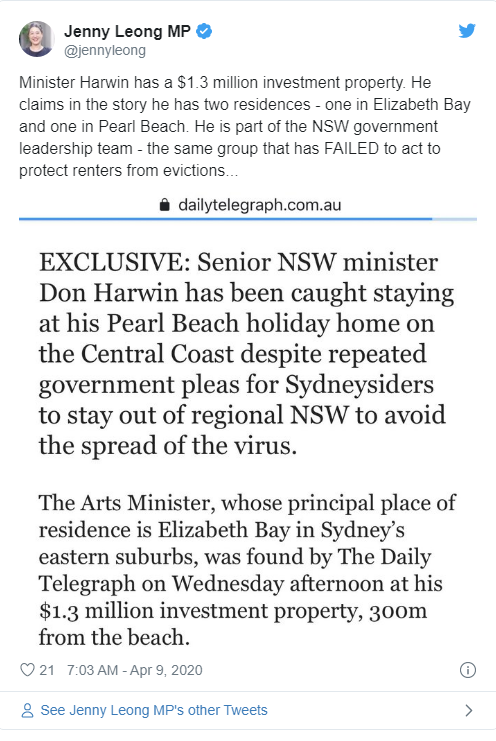 Leaving aside the likely breach of the current health restrictions as well as the fact that he doesn’t seem to be doing much work to support artists while WFHH (working from holiday home), what really has me fired up this morning is the fact that in defence of his actions he has claimed to have two residences. One in Elizabeth Bay and another reportedly worth $1.3 million in Pearl Beach.
Harwin is part of the NSW government leadership team - and a member of the NSW Cabinet, the same group that has FAILED to act to protect renters from evictions during this crisis. Back in 2018 we did the numbers and the majority of NSW Cabinet Ministers owned multiple properties, with a couple owning as many 12 and 15 each - given this clear conflict of interest - is it any surprise that they are stalling when it comes to implementing the moratorium on evictions?
The fragility of our housing - and our entire economic system - has been brought into sharp focus by this pandemic. When the health advice and mandated restrictions are to ‘stay home’, the stark reality for so many who are homeless or live in insecure housing situations, comes to the fore.
For people who rent, and those get their income from casual, freelance or contract work (and these situations so often go hand in hand), the effect is devastating. And given that around a third of people in Australia rent their homes, this affects millions of people.
With the cancelation of festivals, events, weddings, holidays and public gatherings, many thousands of people working in arts, hospitality, retail, creative industries and other casual jobs suddenly have no income. And face the terrifying prospect of no income for many months. How then can they pay their rent? And if they can’t, will we see massive amounts of people evicted into homelessness, and a compounding crisis?
This health crisis has already caused significant numbers of people to lose all or most of their income. The stress and impact of this loss of income should not be compounded by the threat of eviction hanging over their heads.
The moratorium on evictions announced by the Prime Minister on Sunday 29 March - was a great first step and something we had been pushing for along with tenants advocacy organisations for weeks. 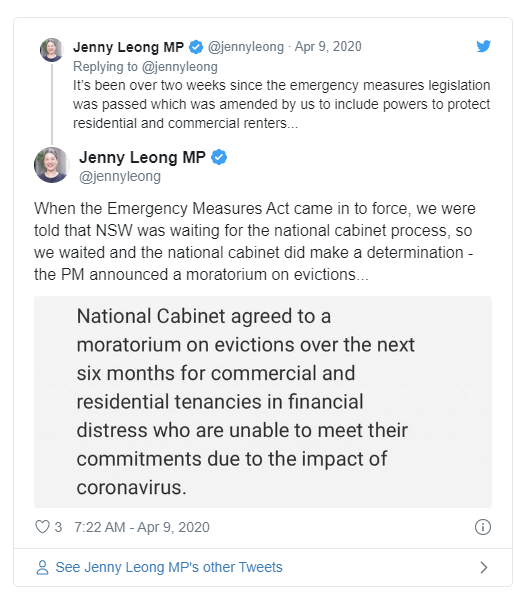 But over two weeks after emergency legislation came into effect in NSW - which we amended to empower the minister to act immediately to put in place a moratorium on evictions and other protections for renters - and nearly two weeks since the PM’s press conference announced that, “states and territories will be moving to put a moratorium on evictions of persons as a result of financial distress ... for the next six months,” - there has still been no action and no actual detail.
What are they waiting for?
The government is already scrambling to try to find accomodation solutions for those who are homeless and sleeping rough during this pandemic. Not acting quickly to protect renters will see a massive increase in homelessness at a time when everyone needs a home so that they can stay home. Averting this human and societal disaster should be a high priority of government. Groups identified as 'at risk' should not have to make the decision as to whether to put their health or their home first.
A moratorium on evictions is just the first step needed to protect renters. The next step must be to ensure that those unable to pay rent due to loss of income aren't left with a massive debt and that a clear plan is developed to support people who are homeless, and public housing tenants who need assistance to isolate. There are different approaches and mechanisms that can be used, but the principle should remain: that no one is forced into homlessness due to this crisis. People should be able to shelter in place, and stay in their homes. It’s never been more important for people to be able to have a safe home at this time when we’re all being asked to stay home as much as we can for the good of the entire community.
Already, I have been told stories of tenants being threatened with eviction if they cannot pay the rent. If everyone in society behaved like this, we would be in serious trouble. And that includes our state governments who can ensure right now that everyone has a home to shelter in during this difficult time.
If you are struggling to know what to do while we wait for specific protection and relief to be announced I would urge you to check out the really impressive information from the NSW Tenants Union - as well as sharing your situation directly with the NSW Premier and the NSW Treasurer.
Share Tweet
MEDIA RELEASE: Redevelopment of Elizabeth Street, Redfern will be a sell off of public land for private profit