Setting the Agenda: Achieving Meaningful Reform for Women in NSW 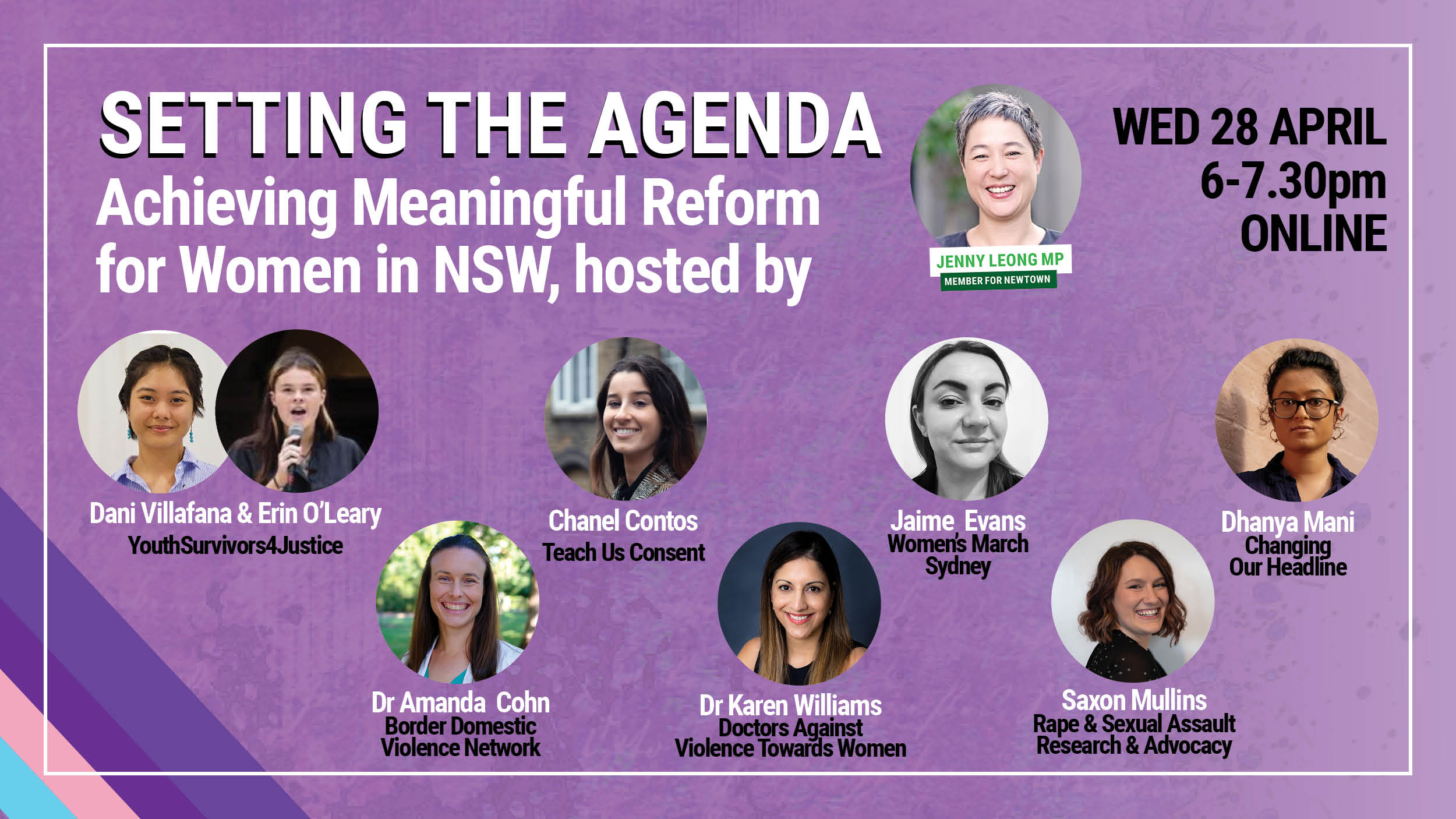 We are at a turning point in our centuries old campaign for justice for women in NSW. In the last few months we have seen a new generation of young people driving mass mobilisations on the streets and huge online engagements as thousands of young women speak out for the first time, demanding an end to the rampant injustice they face on a daily basis. We’ve see heated debates about misogyny, sexual violence and power imbalances in our parliaments, workplaces and society in mainstream media and it is clear that there is a renewed appetite for change.

Whether we are talking about injustices in the form of sexual harassment and assault in the workplace or in society, consent laws or how the justice system treats survivors, the conversation has changed. We are no longer debating IF women suffer as a result of the misogyny built into every aspect of society, but what can be done right now to change that.

We can be that change. And these women are leading the way.

Join us for a panel discussion with some of the incredible young women on the front lines, working to build the momentum, engage diverse communities,and implement the solutions that we need to achieve meaningful reform.

Hear from these incredible activists, campaigners and communicators directly about the work they have been doing to push the boundaries, where we are headed next and how we can work together to get where we need to be.

Something has shifted and the steady call for justice for women has become an almighty roar. Now it is up to us to grab hold of this new momentum, and join together to realise meaningful reform.

Join the meeting on Zoom from 6pm:

Jaime Evans is the Director of Women’s March Sydney and lead of the Sydney chapter of March4Justice. Inspired to work on ongoing actions in support of equality, civility, and justice, Jaime leads Women’s March Sydney within the HERS (Health, Economic Security, Representation & Safety) framework to address critical issues that disproportionately affect women, with a particular focus on safety and the ongoing national crisis of Family & Domestic Violence and gendered violence.
.
Chanel Contos is a consent education activist. Since February, she has collected almost 40,000 signatures that call for the inclusion of earlier and more holistic consent education in the Australian curriculum, for the purpose of reducing sexual assault and promoting positive intimacy. To date, she has collated over 6000 testimonies of sexual assault in Australian school children, and is using these to push for reform in not only education but policy, legislation, and culture. She is currently undertaking a Masters in Education, Gender and International Development at University College London.
.
Dr Amanda Cohn is a GP, the Deputy Mayor of Albury, and Chair of the Border Domestic Violence Network. She was a key voice in the campaign to decriminalise abortion in NSW, works in community health with victims of family violence and sexual assault, and has published academic research on the sexual health education needs of young people.
.
Dani Villafaña is a 17-year-old school high school student and co-founder of YouthSurvivors4Justice, a youth collective advocating for justice for survivors of sexual violence, holistic standardised consent education and economic safety for women. Dani is also a climate justice activist and organiser for School Strike for Climate which in 2019 mobilised over 300,000 Australians to demand climate justice. She lives in Sydney.
.
Erin O'Leary is a Sydney based activist, focused on bringing justice to victims of sexual violence and also very active in the climate justice movement.
.
Dhanya Mani worked for 4 years as an adviser to NSW Parliamentarians. She has worked across the law and government - including as a tipstaff in the Equity Division in the Supreme Court of NSW, and recently as an analyst in Treasury's Foreign Investment Division. She is now studying English Literature and Philosophy, and is working full-time as an advocate and freelance writer focused on issues impacting political minorities - particularly women and people of colour. She is the founder of 'Changing Our Headline' - a non-partisan campaign to create a safe, healthy and feminist culture in Australian political life, workplaces, and beyond.
.

Dr. Karen Williams is a Consultant Psychiatrist with specialty training in General Adult Psychiatry, and a Fellowship in Post-Traumatic Stress Disorder. She works at South Coast Private Hospital and is the Special Advisor on Mental Health at the Illawarra Women’s Health Centre. She is also a member of the Professional Advisory Group for The Trauma Recovery Centre being developed on New South Wale’s South Coast. Dr. Williams is the founder of Doctors Against Violence Towards Women, an advocacy group aimed at promoting the mental and physical safety of women who are survivors of Family Violence and sexual assault.

Saxon Mullins is Director of Advocacy at Rape and Sexual Assault Research and Advocacy. In 2018 Saxon appeared on Four Corner’s episode ‘I am that girl’ where she gave up her anonymity to tell the story of her 2013 sexual assault and the subsequent criminal trials and appeals. The Four Corner’s episode led to the NSW Attorney-General asking the NSW Law Reform Commission to review the section of the NSW Crimes Act that deals with consent in relation to sexual assault. Saxon was the recipient of the Australian Human Rights Commission’s 2018 Young Persons’ Human Rights Medal. She is passionate about igniting a conversation about enthusiastic consent not only in relation to how this is dealt with under the law, but also views about consent within society, particularly from young people.

Online - Zoom (link will be supplied on the day)