On Saturday 3rd October Member for Newtown and Greens Spokesperson for WestConnex Jenny Leong joined the snap action at the Alexandria Landfill site in St Peters.

The site is contaminated with asbestos and residents are rightly concerned about its safe removal.

Here is a transcription of Jenny's speech, which you can also listen to at the bottom of this page. 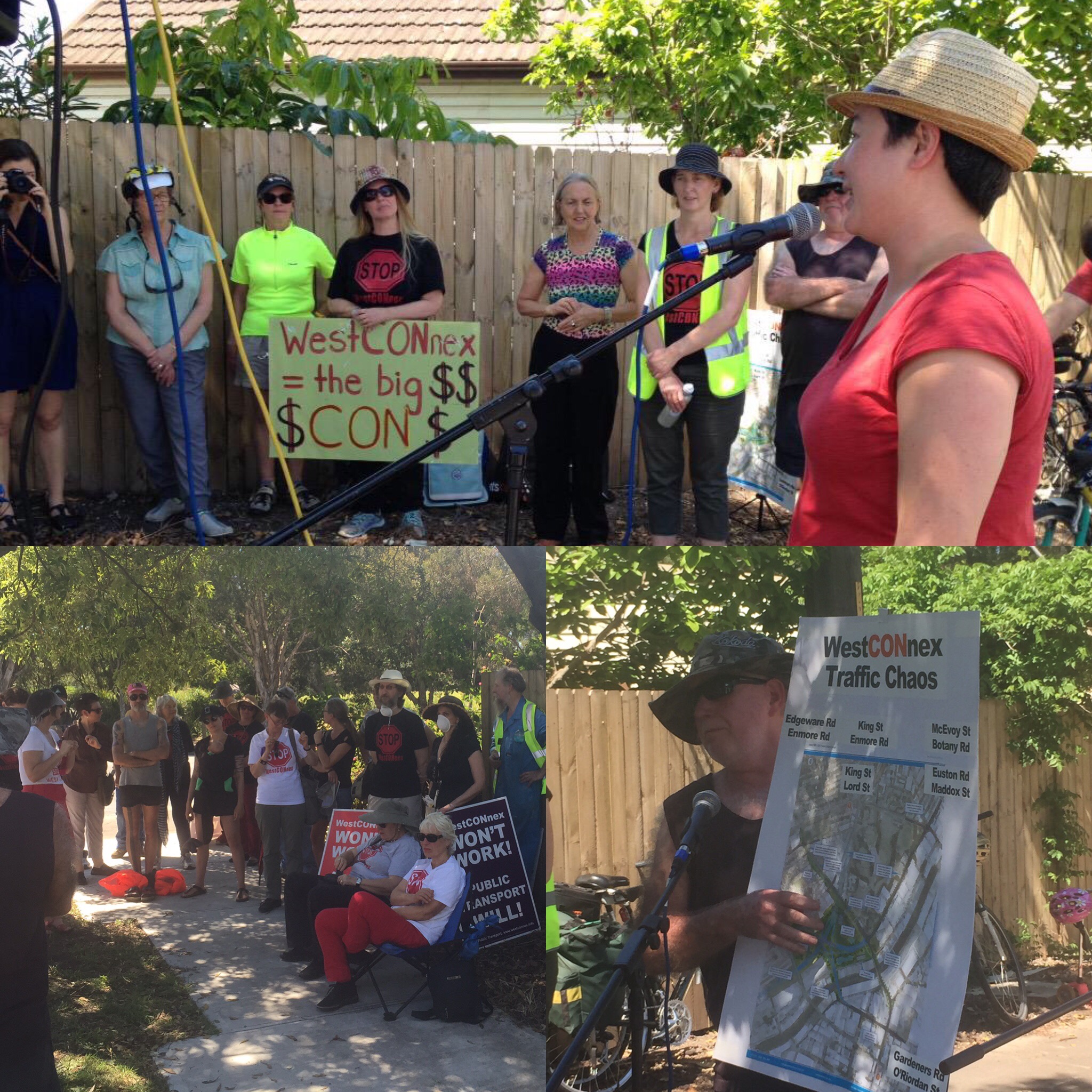 It is wonderful to see another crowd of people here and can I just say that one of things that I think is a sign of a strong campaign building is when no individual can know all the bits that are happening anymore.  And I think that we have, in the last couple of months, managed to build this campaign to the point where no one individual could claim that they can hold it all, they can know it all or they can control it all. And that is how you start to win solid campaigns.  So I think that is a massive credit to the incredible amount of work that people have done up until this point in the community to build this, over many, many years. Before people even knew that it was a problem in St Peters, there were people that were going through the details of the proposal.  Before we had Tony Abbott and Mike Baird come down and announce the St Peters Interchange, there were people that had been fighting versions of this motorway for decades before.  And what we now see is that actually the newer people that have come to this campaign, the folks around this area, actually building and strengthening the campaign and the grassroots capacity to engage and mobilise people further along the route.

I think that any campaign that is going to win needs to be bigger than any one individual, and I think that we have proved that this campaign is on a winning streak, because none of us can claim it as our own now.  It is bigger than all of us, and that is a pretty amazing thing.

So the other thing I wanted to just to be able to say, and I’m really pleased to be able to share it with you, is that yesterday we did the quite bizarre menial task but incredibly wonderful task of trying to collate ten thousand names on a petition to put in some reasonable format to be able to table in the New South Wales Parliament. I can tell you it was not as easy a task as what I thought, and we haven’t been able to data entry it all, but we’ve made copies, but where we’re at is that basically yesterday afternoon in the office we were able to pull together… I think the count at least was around 10,147 signatures, which is a pretty impressive effort.

I would say that Lorrie Graham has definitely signed duplicate times, so we wanted to make sure that we had enough. Because in her…the incredible amount of signatures that the Newtown group have managed to achieve and through the amazing contribution that Lorrie has made, I think in her eagerness to encourage people to fill out all the details, she may have signed it a number of times. But I made sure that we were about a hundred and fifty over, so that that made up for any eager signatures from some people who thought that they might really hate the project and sign it more than once.

So I’m going to go into the Parliament on Tuesday morning and I’m going to table it. Now we don’t know then when in the cycle it will be able to have a debate, but we know that a debate will be necessary.  So once we do that, then we hear - and we’re basically at the whim of the government in terms of the timing, whether it can happen this year, when it happens - so I will make sure that I let you know.

The other thing I wanted to say is that I think that the comments made around disrupting are key.  I think that all of us now have an obligation to do whatever we can, in whatever way that we can, to delay and disrupt the construction of this motorway. And that means that we need to work together to recognise that we actually need to support any action that is taken to disrupt it, because the more different angles of disruption we have, the better we will distract them from their goal. And so, I actually, you know, in complete difference to, say, how I might have once run a campaign at Amnesty on certain things, believe that the way that we are going to win this is by having multiple actions pop up everywhere, multiple little stunts and approaches to being able to campaign against this that they can’t predict.  Different forms and email addresses and people contacting different ministers, disrupting and questioning what’s going on.

Actually, one of our strengths here is the fact that we all agree that we need to stop this WestConnex motorway.  And all of the tactics and the campaign avenues that we can take to be able to disrupt them in any way that we can are going to help us achieve that goal. So we are strong because we agree on the overarching goal. We are strong because our campaign is now bigger than any one of us could keep control of. And that to me is the sign of a solid campaign that will win. So thank you all for coming out and for always being around. 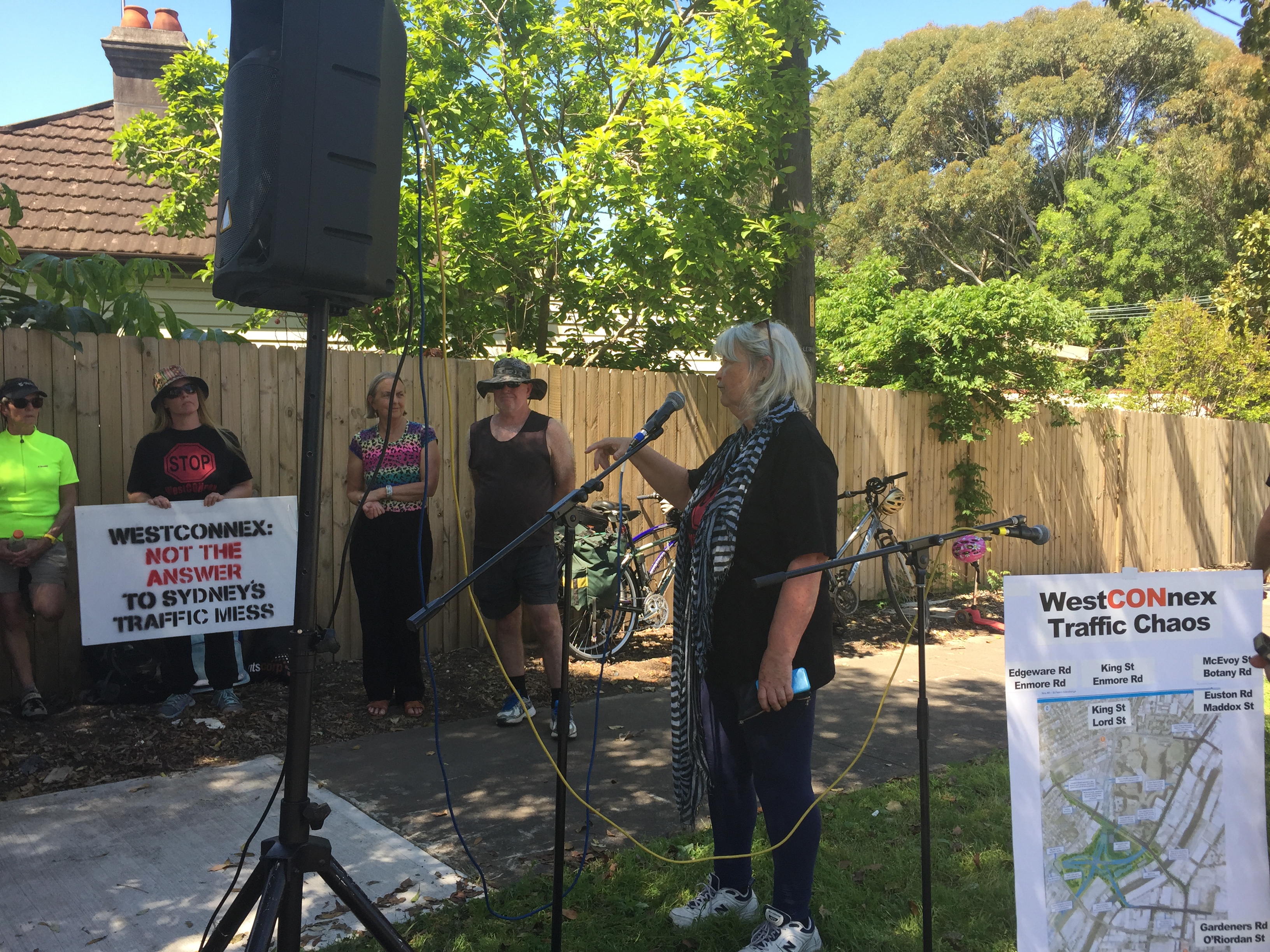 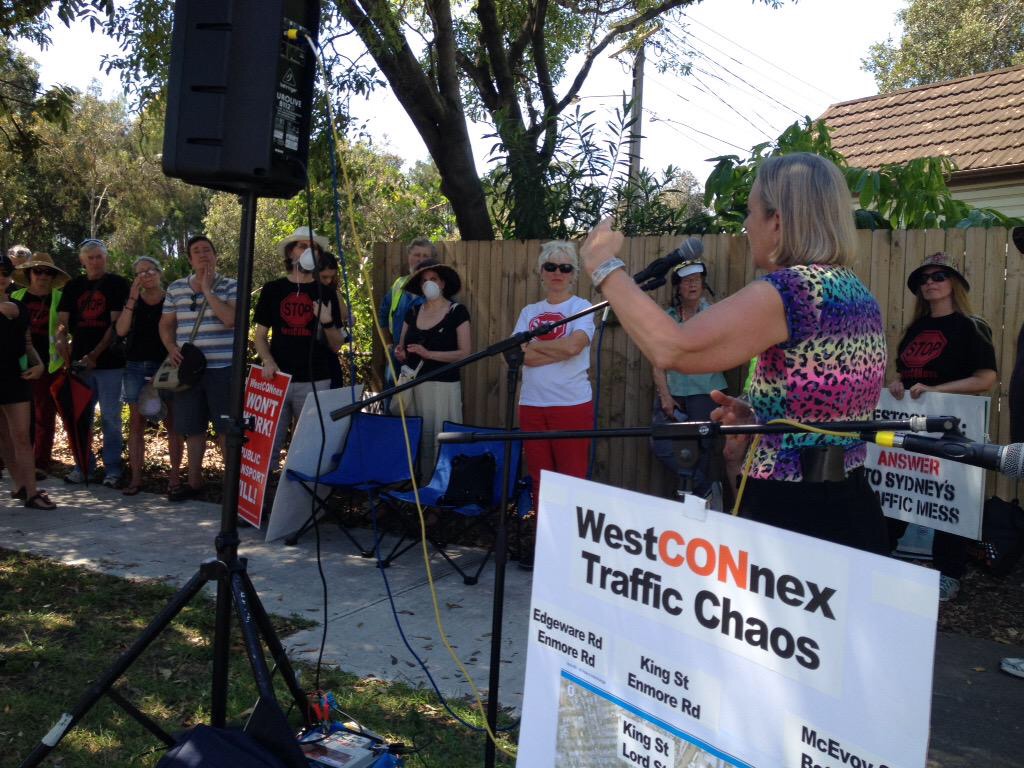 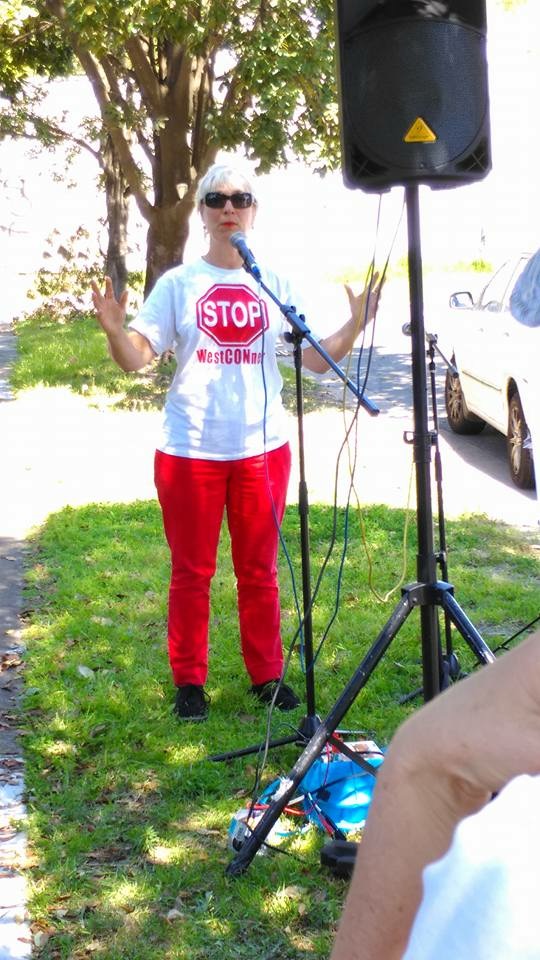 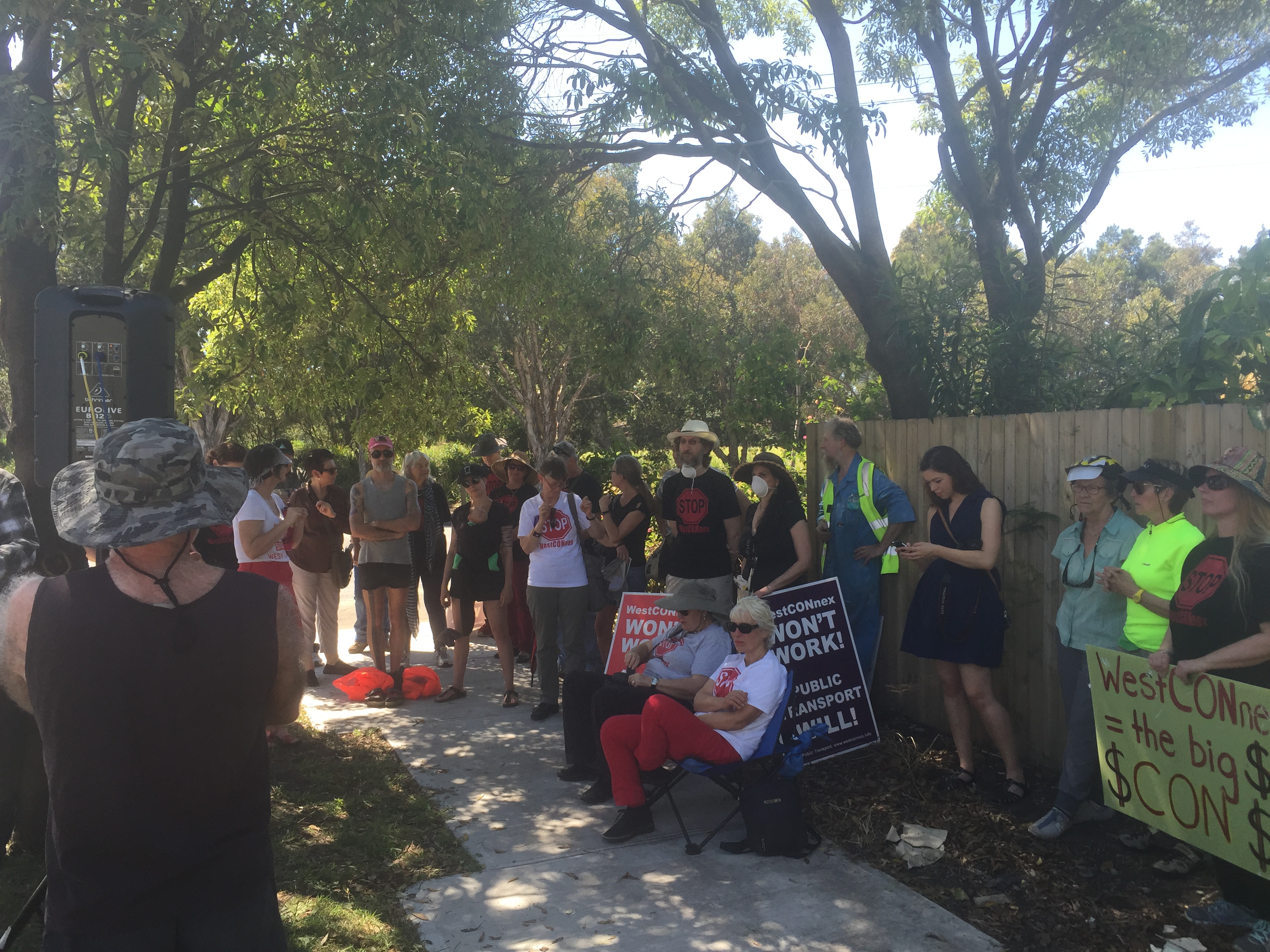 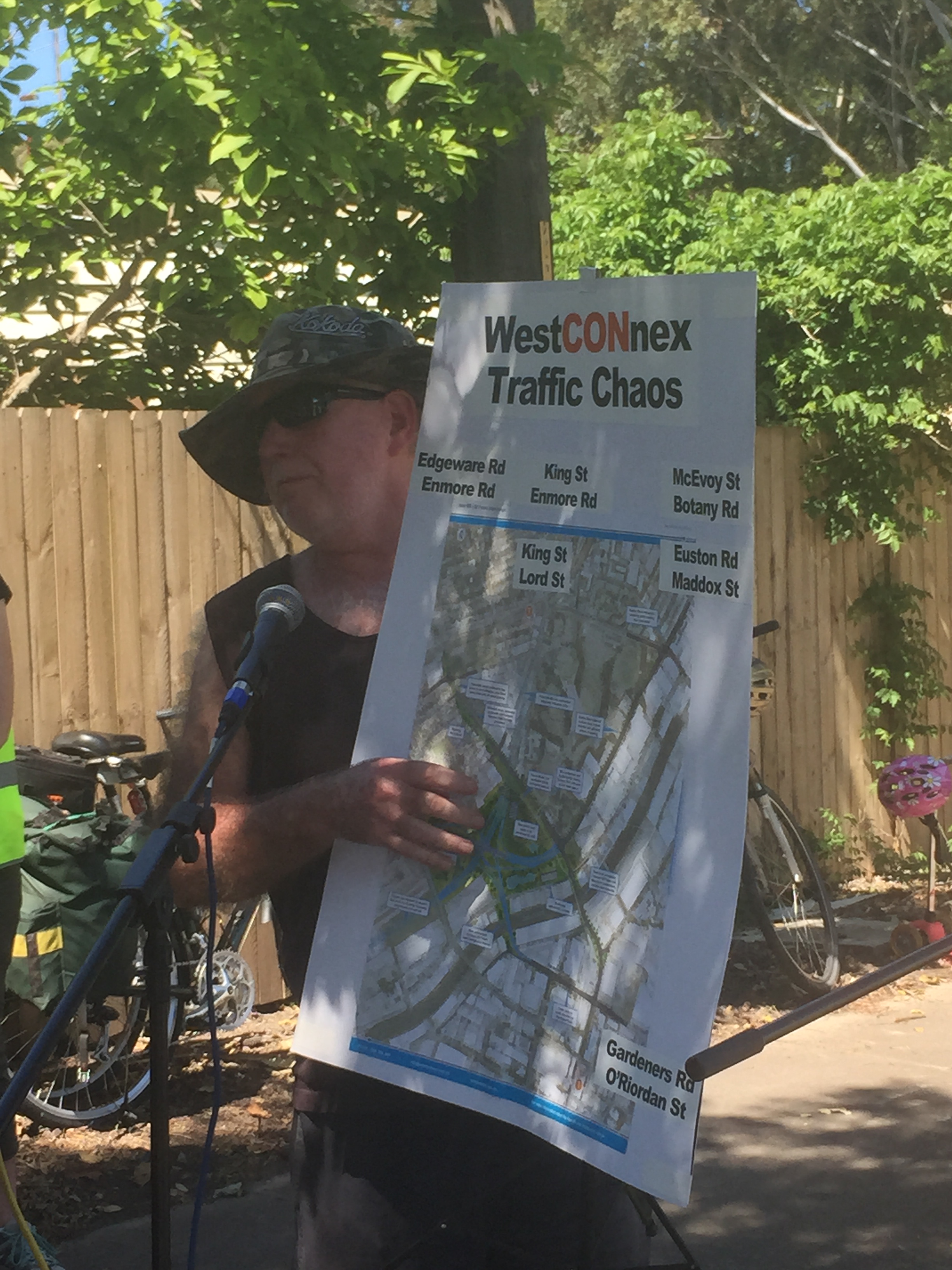