Today’s rezoning approval officially rubber stamps the destruction of the Waterloo South public housing estate and will force hundreds of Waterloo residents out of their home.

“Today’s approval rubber stamps the unacceptable destruction of public housing in Waterloo and will force hundreds of people out of their home and the community they’ve lived in for years.

“Like many public housing estates, Waterloo has been neglected by successive governments who have underfunded maintenance and let our public housing deteriorate to justify the widescale sell off of public land.

“The Waterloo community has resisted this redevelopment since it was shamefully first announced just before Christmas in 2016.

“Since then the housing crisis has only gotten worse and the chronic lack of public and affordable housing in Sydney and throughout NSW has intensified.

“Disgracefully this rezoning will see a huge amount of public land sold off and turned over to the private housing market for private profit, for a measly increase in the number of social housing units.

“Right now there are more than 100,000 people on the public housing waiting list, some of whom have been waiting for over a decade. This rezoning will do nothing to meet their immediate need for safe and secure housing.

“This destruction isn't inevitable. NSW Labor must commit to stopping the demolition and co-designing a renewal strategy with the community that keeps people in their homes and ensures the site remains 100% public housing - not a plaything for private developers.

“The Greens stand in solidarity with all Waterloo residents now facing forced relocations. We will always defend public housing and everyone’s right to a safe, secure and affordable home.,” Ms Leong said.

It's unacceptable that the NSW Government is privatising public housing and public lands through it's Communities Plus formula that allows for the sale of up to 70% of all dwellings as private housing in all public housing redevelopments.

We reject the privatisation of public housing estates and the sell off of public land to private developers.

NSW Land and Housing plans to privatise 70% of the proposed redevelopments in the public housing estates in Waterloo and South Eveleigh and in the proposed new housing development at 600 Elizabeth Street, Redfern.

NSW has a chronic lack of public housing and the government has let its existing stock fall into disrepair. Family sized dwellings will be demolished in favour of 1 and 2 bedroom units in South Eveleigh and there will be are no quotas for Aboriginal housing in either project.

We want to see investment in public housing so that the 100,000 people on the Housing waiting list are housed and all public housing properties are properly maintained.

After strong community campaigning against the plans for the redevelopment of public housing in Cowper Street and Wentworth Park Road in Glebe, the Minister for Housing, changed the plan to part-privatise this redevelopment so that there now will be 100 percent social housing on this site.

We call on the NSW government to reject the Communities Plus formula for public housing developments in Waterloo, Eveleigh and Redfern and to increase its investment in public housing.

We reject the privatisation of public housing property and land.

Sign this petition to the Housing Minister and add your comments.

To the NSW Housing Minister,

Specifically, we call on you to review the redevelopment plans for the Waterloo South redevelopment, the Explorer Street Public Housing redevelopment in South Eveleigh and the plans for 600 Elizabeth Street, Redfern so that:

Today's announcement by the NSW Minister for Social Housing, Pru Goward on the plans for the redevelopment of the Waterloo housing estate represents one of the NSW Liberal National government’s largest sell offs of a public asset, according to NSW Greens Housing spokesperson, Jenny Leong MP, Member for Newtown.

“This is public land and right now there’s an urgent need for a significant action to address the housing stress people in our city are currently experiencing.

“In the current crisis, it is unacceptable that 70% of the proposed development on this public land will be turned over to corporate developers to make massive profits  – it’s time to call a halt to this scam.

The Sydney Metro will be a privately operated metro line running from Chatswood to Bankstown. The southern part of the route from the CBD to Bankstown will replace the current Bankstown line on the Sydney Trains network – a functional line that is now in public hands.

There will also be impacts on residents who live near the Marrickville ‘dive tunnel’ that will join the existing terrestrial train line to the new underground section of the Metro.

A new metro station will be built in Waterloo, where around 2000 existing public housing residences will be demolished to make way for a large residential development. There will be impacts on residents around that area too. 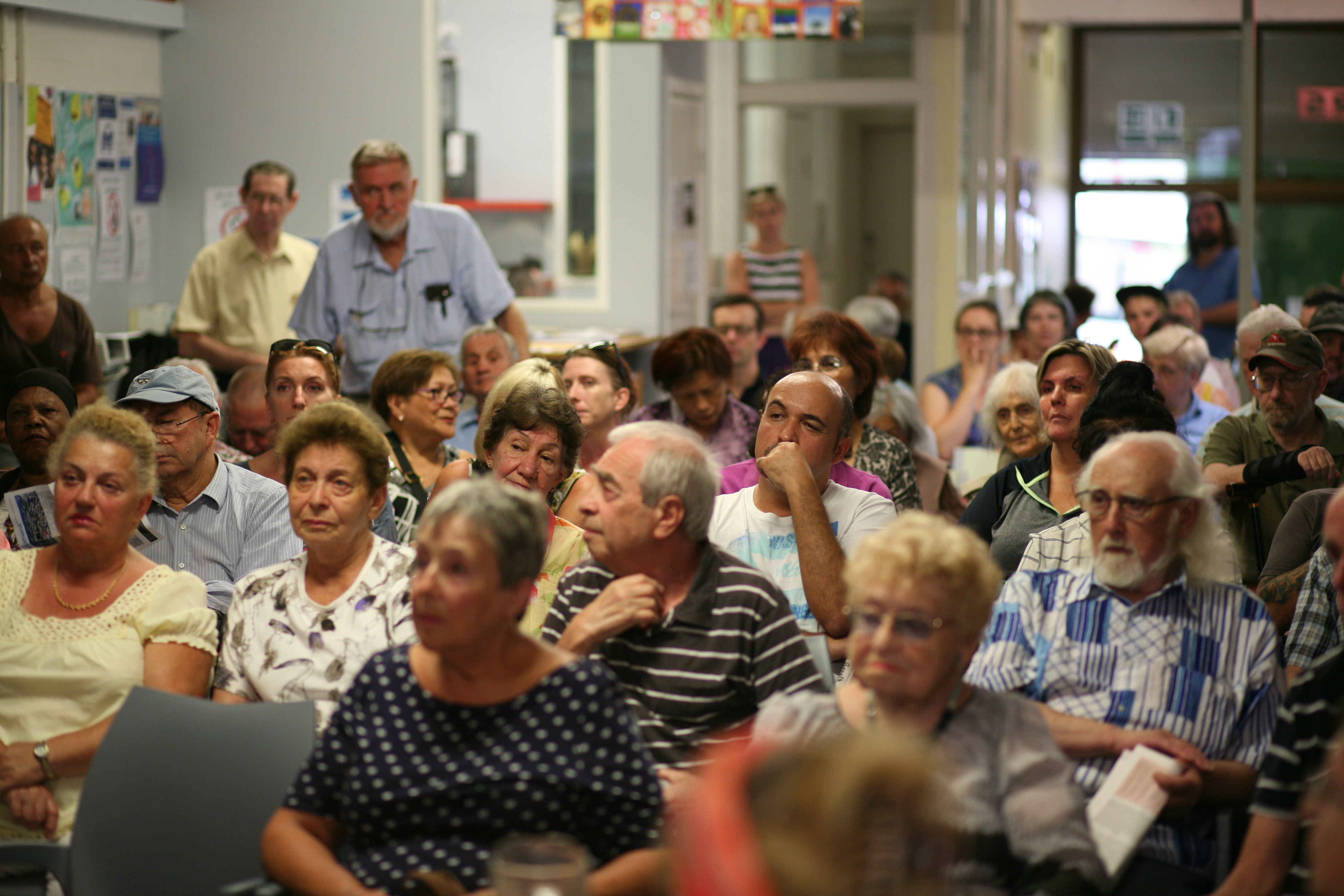 Around 150 residents joined a public meeting at The Factory in Waterloo on Thursday 11th February, to voice their concerns about the future of public housing in Waterloo.

The cause of concerns is the announcement by the NSW Government late last year that two thousand Waterloo public housing residences will be demolished to make way for a development built around the new metro train station.

Today the NSW Government has announced a Sydney Metro station at Waterloo.

Member for Newtown Jenny Leong says that it’s reasonable that the local community has concerns about the implications of the decision, particularly around public and affordable housing, and transport accessibility.

NSW Greens Member for Newtown Jenny Leong, which covers the Redfern area, and Jan Barham, Housing spokesperson have responded to today’s announcement that a private Metro station will be built in Waterloo highlighting the serious housing concerns.

Two thousand existing public housing residences will be demolished to make way for the development.

“The announcement by the state Government today will see Urban Growth taking over the development of large parts of our Redfern/Waterloo public housing community. This is cause for serious concern – not because redevelopment of public housing isn’t needed, but because Urban Growth’s track record in our area has seen some pretty devastating outcomes – including the selloff of the Australian Technology Park site and massive proposed overdevelopment at North Eveleigh.

“While we acknowledge the Government’s commitment that the number of social housing dwellings will be maintained in the new development, we need to ensure that these dwellings will continue to house the same number of residents.

“We have seen cases of redevelopment of public housing where the number of dwellings has been maintained but with a significant reduction in size. As a minimum we need a commitment that there will be no reduction in the number of bedrooms or number of residents that can be housed.