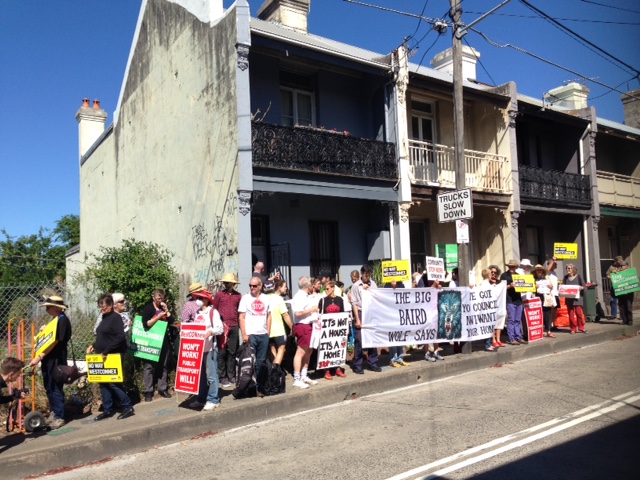 Last week residents and protesters fighting WestConnex in Newtown and St. Peters faced off police at a drilling site and conducted a vigil as a Campbell St resident was forced to leave her home as one of the last remaining in that street due to WestConnex compulsory acquisitions.

On Friday Oct 21, the company preparing the plan for the M4/M5 (Stage 3 WestConnex tunnel), AECOM, called the police and riot squad to remove about 30 locals who'd gathered on Holmwood Street, Newtown to protest against their impending exploratory drilling.

Three people, including well known local activist and investigative journalist Wendy Bacon, were roughly dragged into paddy wagons and taken to Newtown Police Station where they were held for over 8 hours.  During this time, paramedics were called to check on injuries sustained by the other female protester who it was thought had a suspected fracture. Although the police were advised that she should be taken to hospital for an X-Ray, this was refused.

All three were finally charged with 'trespassing on enclosed lands' even though metal fences were constructed around the protesters by the workmen.  One person was given an extra charge of 'refusing arrest' but disputes that any indication was given by police that they were being arrested prior to being dragged into the paddy wagon.

Two days earlier, just down the road on Campbell Street, St. Peters, a vigil was held as longtime resident, Shelley, was forced to leave her home knowing that the compensation she'd received from the RMS and WestConnex would not allow her to ever return to her community. She's been moved to a serviced apartment for the time being but after that, Shelley's not sure what will happen or where she can find a new home.

Shelley's story is not unique. Many residents all along the WestConnex route have silently and sadly left their homes over the past year or two settling for inadequate compensation rather than taking on the State in protracted court cases.

And all of this in the week when Premier Baird announced that the Coalition would show more compassion regarding the compulsory acquisition process and implement some of the recommendations of the Russell Review, which shamefully, they have sat on for over 2 years.

However this announcement of potential extra payments didn't address the large gap between the market value of residents' homes and what they've been forced to accept from the NSW government.

This is a shocking indictment of the way the Baird Government is driving through it's road privatization agenda and trampling on the rights of everyone in their way.